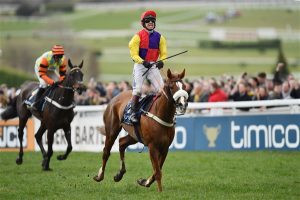 The 2018 Cheltenham Gold Cup featured fifteen runners and looked competitive enough on paper, with the bookmakers offering 4/1 the field at the ‘off’. The King George VI Chase-winner Might Bite was sent off favourite, but was closely attended in the betting by Red Mills Chase-winner Our Duke, at 9/2, and Native River, third in 2017 and a ready, 12-length winner of his only race since, at 5/1. Beyond the market leaders, Co. Carlow trainer Willie Mullins – still seeking his first Cheltenham Gold Cup – saddled a quarter headed by Killultagh Vic, an unlucky final fence faller in the Irish Gold Cup at Leopardstown, at 8/1, while Definitly Red, trained by Brian Ellison, and Road To Respect, trained by Noel Meade, were also available at single-figure prices.

However, despite the open-looking nature of the contest, very few of the runners featured. Our Duke was particularly disappointing, never really travelling after a couple of mistakes around halfway and pulled up at the fourth-last fence when well behind. Killultagh Vic was similarly tailed off when pulled up between the last two fences and Definitly Red, while completing the course, was struggling a long way out and never threatened to be involved in the finish.

The race was dominated, from flagfall, by Native River and Might Bite, who had a real ding-dong battle for most of the way. Having made virtually all, Native River was narrowly headed by Might Bite at the second-last, but soon regained the advantage and stayed on very gamely on the run-in to win by 4½ lengths. Might Bite was essentially outstayed by his rival in the closing stages, but kept on for clear second-place, 4 lengths ahead of 33/1 chance Anibale Fly, who finished to good effect, but never had any chance of reeling in the front pair.

A year by year guide to the unmissable Cheltenham Gold Cup